Teaming up with John Fowler 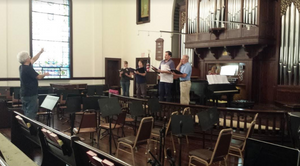 Greetings all! I am excited about our concert season this fall, and I wanted to talk to you a little bit today about why the concert in Statesville in September and this week’s concert in Troy are so much fun for me. The name of the concert is “Opera and Broadway” but the truth is that I get to perform with one of my favorite opera singers, John Fowler. For those of you that do not know him, he is an opera star, a tenor who has sung in the world's premier opera houses, including New York's Metropolitan Opera, San Francisco Opera, and German Opera Theatre. Mr. Fowler was awarded an Emmy for his portrayal of Rodolfo in Puccini's La Bohème as part of PBS's Live from Lincoln Center television series, a role he has sung over 300 times on major operatic stages worldwide.

I first met John about fifteen years ago when I was working with the North Carolina Opera Company (with the director John Galbraith) and John was singing the role of Cavaradossi in a production of “Tosca” at Memorial Auditorium in Raleigh. We became fast friends from then on, and we worked together again as he played Rodolpdo in “La Boheme”. Over the years we have done countless performances together including some concerts featuring my own compositions, and also productions with his opera company Southeast Opera Experience.

People ask me what it is like to work with John, what makes him stand out in opera.  I have to say that he does have this most incredible voice, but it is his ability to deliver that voice with this most incredible intimacy that is there even in a big opera house; that execution and emotion that he brings to a role. He makes the role his own and then he just pulls you in…very passionate, very articulate, very sensitive. Of course there is that big opera sound that we all know and love, but the joy is in his sincere and emotional singing.

That’s why I so love working with John. I grew up with my father who was a great opera singer for many years. I remember I would crawl and sit under the piano while my mother rehearsed with him and other singers. They came through our home constantly, every day, and sang and talked and visited. When I work with John and his group of artists it feels like home to me. It is so comfortable, and that makes me so happy to have opportunities to work with such a talented individual.

I think this also makes him a different kind of teacher which is why he has many students that have become prominent performers in their own right. I do not mean that he does not teach them technique, but he does so much more. He is really good at spotting the potential in a voice and showing students how to bring this out, maybe transitioning from a baritone to a tenor, expanding their range, or even creating a repertoire with a new direction. He also brings his vast experience to the direction about stage roles and actually show students how to sing a tenor part, but with the complete package…how you think, how to feel the pain and the tears, and how that sparks such emotional intensity in the voice. I saw him work with Jeff Gwaltney in this manner, and it completely changed his approach to opera.

I think if you ever want to listen to John, well I just adore anything that he sings, but his Puccini is perfect. I also love his Rodolpho, (which is one of his signature roles) and his Cavaradossi aria is so beautiful it is like an emotional spark. But of course my all-time favorite is when he played the part of The Prodigal Son in my own oratorio “The Parables”! I am hoping we can do this again as a performance perhaps this spring. It is so personal to me, and to hear his voice in that work brings me such joy.

People also ask me about how John approaches a performance or a rehearsal and to be honest, when I think of John I think of that famous Pavarotti quote: “If you are not sweating, you’re not working hard. If you’re not working hard, you’re not good enough. And if you’re not good enough, go away.” That’s how hard John works. I don’t think people understand that. He is that dedicated to the music, and it’s not about the roles, or the fame or the house you live in, or anything else. That’s what he teaches other musicians. If you want to perform at such an intense level, you have to be prepared for that level of commitment. That is the way my father and mother raised me to think about the music, and that is why John is so special to me.

If you want to listen to John here is his Emmy award winning performance of Rodolpho.