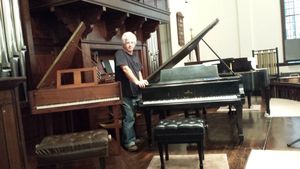 I always have people ask me about Beethoven and his tempo (metronome) markings. I think they are wrong. You have to remember that the metronome was invented later in Beethoven’s career and that the guy that invented it was a friend of his who wanted him to try it out. The markings are much faster than the modern interpretation of his music…but why would that be? Well. We do not know. Maybe that early metronome was not marked correctly….maybe he was marking them from memory. Maybe he had hired people that did not understand the music to go back and place the marks in and they did it incorrectly. The bottom line is that I am a technical guy. I go into the guts of an instrument and I understand the way that they work from the tuning to the action. The instruments in the time of Beethoven, simply put, were not the top of the line that our professionals play today. So the tempos marked on his music, even by our top artists, would have been hard put to been achieved. So; practically, from my technical side, I think that the music is incorrectly marked.