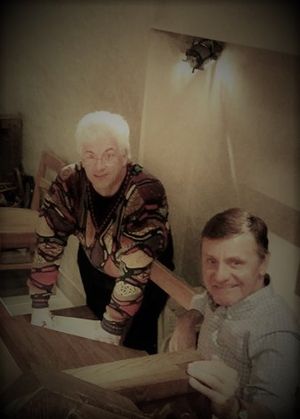 One of the most common questions that I am asked is, "What is the difference between organs, harpsichords, and pianos?"  Sophia and I regularly play all three and regularly interchange these instruments in our concerts.  Because we live and breathe on these music machines, I sometimes forget how mysterious they can be to the rest of the world.  How these instruments work, where they came from, and the differences between them can seem almost mystical.  Hopefully, I can shed just a little bit of light into your darkness and direct you towards a couple of the most basic points of the history and working parts of the tools that Sophia and I work on each day.

Compared to the piano and the harpsichord, the organ is the most complex of the three.  It is also the oldest.  It is also complicated to play.  An organist has to operate not only multiple keyboards (manuals are the technical term) with their fingers but also a big one down below with their feet (called a pedal board).  But put simply, an organ is anything that blows air through pipes to make sound.  The pipes are made with different shapes and materials that give us the different sounds that you hear.  For example, flutes sounds come from square pipes made with wood while trumpet sounds come from pipes are shaped like ice cream cones and made of metal.  A big blower blows air through the pipes as valves are opened at the pipe bottoms allowing a sustained tone for as long as the performer needs.  Different sounds and sustained tones are the primary differences of the pipe organ compared to the piano and harpsichord.

So, where did the organ come from?  Now, we historians love nothing better than arguing about exactly when or where this or that occurred, especially looking this far back into history.  For example, on the one hand, very early water driven organs were reported in ancient Rome.  Many organists call those the first accounts of organs.  Now comes my personal bias and opinion.  I don't agree.  I think these Roman instruments fall into the "steam whistle" category and have little to do with our modern organs.  (But again, I have many distinguished colleagues who disagree with me on this.)  I personally fall into the Constantinople camp.  I am convinced our organs came out of the Eastern Church in what is now Syria and Turkey.  At any rate, all of us organists agree that the organ has been in use in Christian churches since the time of Peter and Paul.  In fact, the use of the organ in Christian worship actually predates the use of both the Cross as a symbol and the Holy Bible (Well…..at least the "New" part!).  The primitive organ continued its development and rapidly spread across Europe on the Roman roads  The air blowing through the pipes was said to represent the Holy Spirit blowing at Pentecost and heavenly choirs of angels.  Germany gets the nod for the oldest truly complex and complete organ ever built and organs became much more innovative, versatile and reliable through the 1500's and 1600's. 1708 was a    landmark year.  During that year J.S. Bach wrote his first great Toccatas and Fugues and the organ was here to stay.  At about the time of our Revolution, Mozart called the organ the "King of Instruments" because of its technical complexity and glorious sound.  The high tech development race was on during the 1800's with France, England, Germany, and the Flemish lands all vying for top honors.  As builders and players immigrated across the Atlantic, the old world powerhouses were soon joined by the great Canadian and American builders.

At this point, organ building split into two types - organs that "power assisted" the player's fingers in some way so they could play more notes and the old style "tracker" that literally ran wood strips from the keys to the pipes to open the air valves.  Most of the time, you can quickly tell the difference.  Mechanics have the keyboards in one place and the pipes somewhere else - usually in a pipe room or chamber.  Trackers have the pipes in a single case of some type directly above the organist and keyboards.

The picture you see in this blog is of me talking with fellow organist Dr. Richard McPherson about the Skinner organ he plays in Northern Virginia just out of DC. We are laughing here because we agree that we organists each have our own "favorite heroes" of organ building.  Mine is Samuel Sebastian Wesley (grandson of Methodist co-founder Charles).  His best friend in the world was one of the sons of the Walker and Sons Organ Company.  Samuel lived not far from the factory and designed what we would call the first truly modern organ around the time of our Civil War.  Every Sunday I get to play an English "tracker" organ that was built in 1997 from his blueprints and then sent to America.

See?  Now you know what I'm talking about. You passed the exam!  Next time, we'll talk about the harpsichord.